Lebanon border- We began our day at Misgav Am, a kibbutz at the northern most point in Israel. A simple wire fence separates the border of Israel and Lebanon or “Hezbolah-land” as our guide Ari Ben Jacob said. From this vantage point, you get a clear sense of the nearness of Israel’s enemies. Less than a mile away in Lebanon, you see beautiful homes once occupied by Christians, now vacant and used as bases for Hezbollah. As Ari said, “They watch us as we watch them as they watch us. 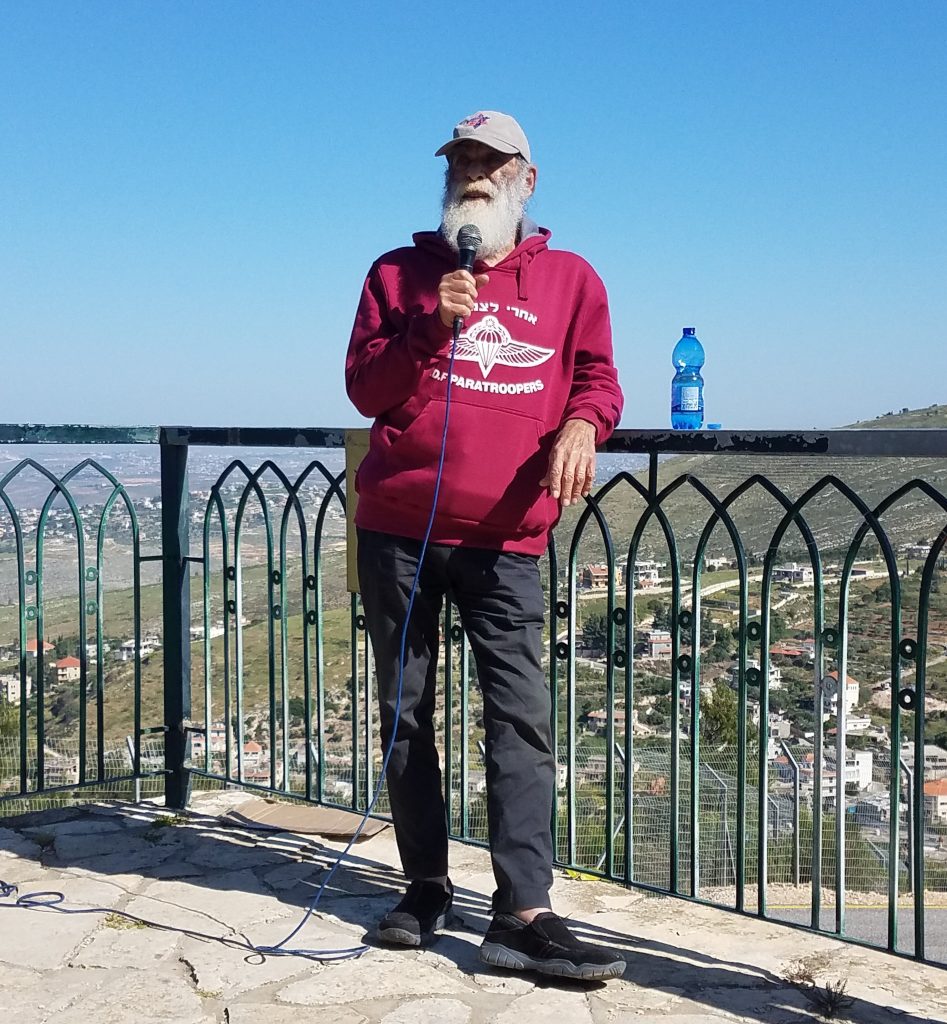 Our visit began with a fascinating talk with Ari.  (listen to the clip) It is well worth the time! 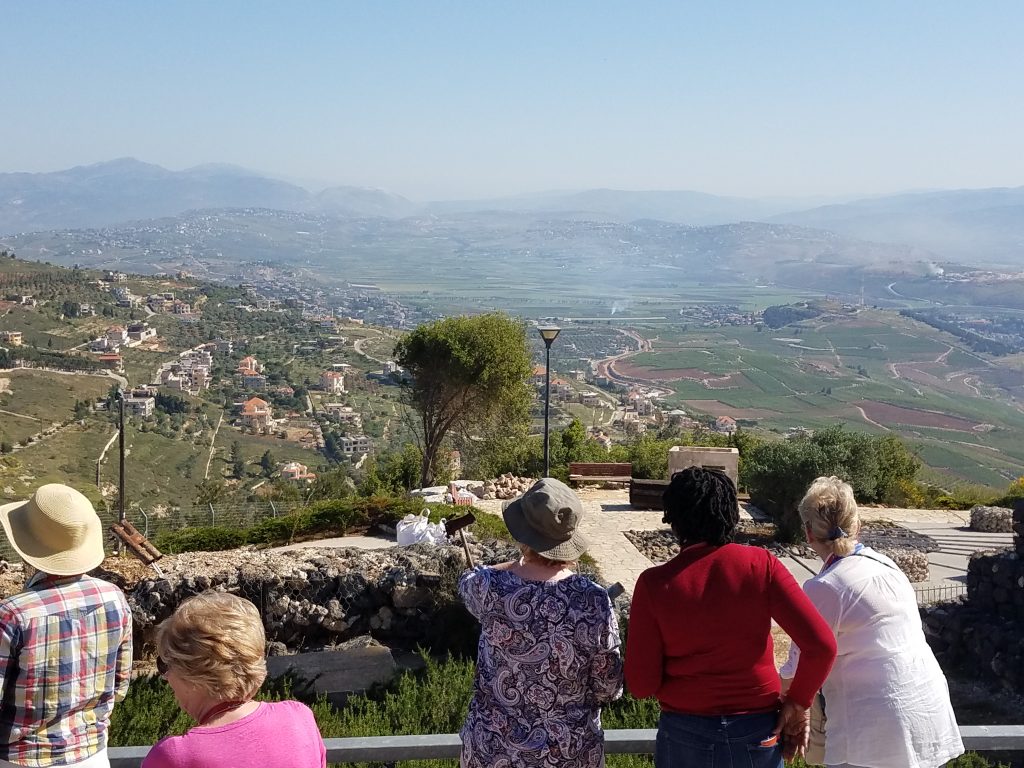 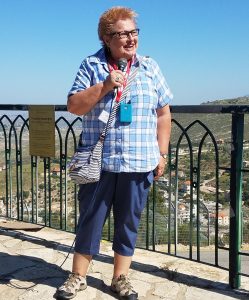 Nancy McDaniels, Aglow’s Prayer Director, prayed powerfully for this strategic areaas we stretched out our hands. We sang the Lord’s Prayer. 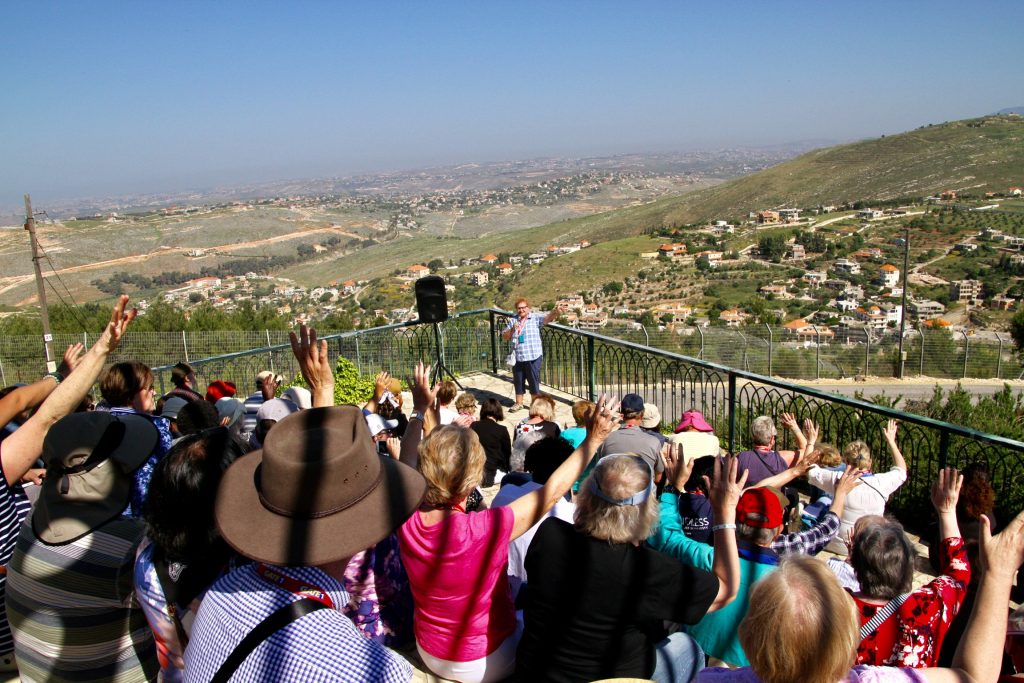 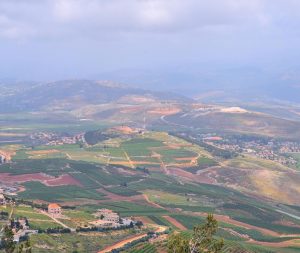 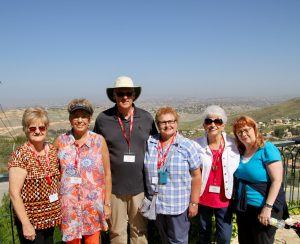 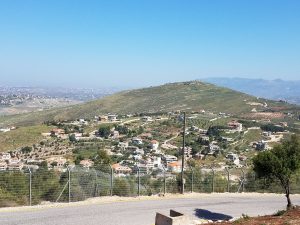 We drove a bit further up the mountain to the border military base and met with the young soldiers who guard the border.  See below: We brought bags of candy and toiletries for them. They were thrilled to get the goodies and we had a nice visit with them.  These soldiers were a year and half out of high school. 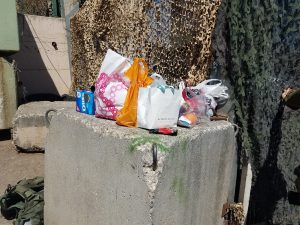 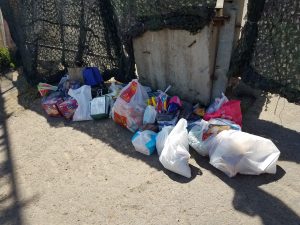 This was the place of worship of Pan, pictured as half man half goat. He was the god of the wild as well as sexual and spiritual possession and of victory in battle. The cave at Banias, was thought of as a bottomless pit, where human and animal sacrifices were made to please Pan. This place of total depravity, the darkest pagan place of the known world, was believed to be the very gate of hell itself. 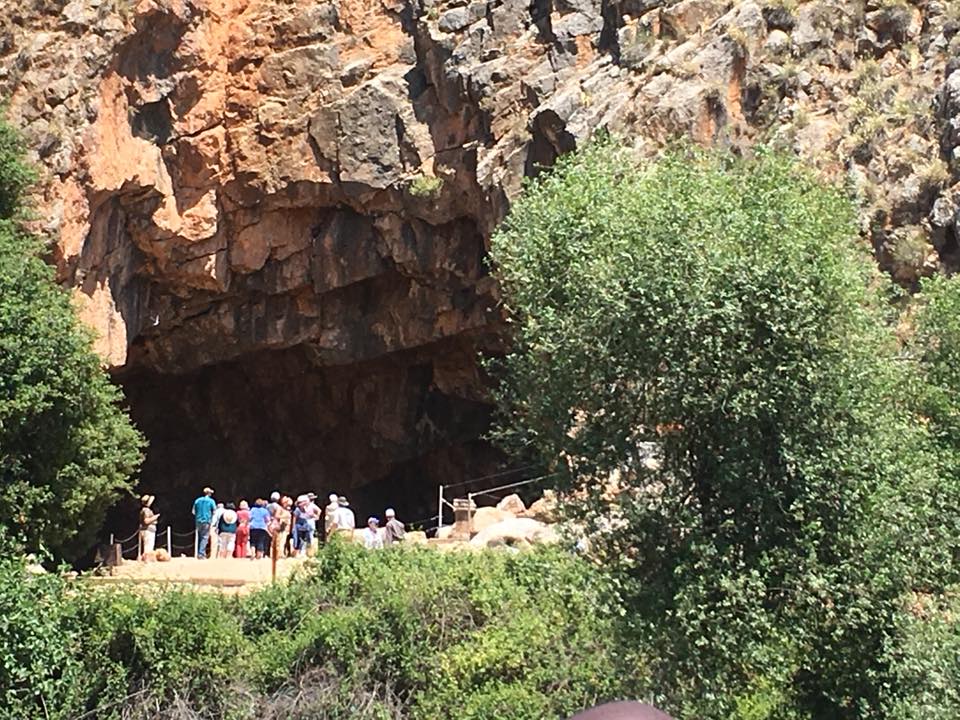 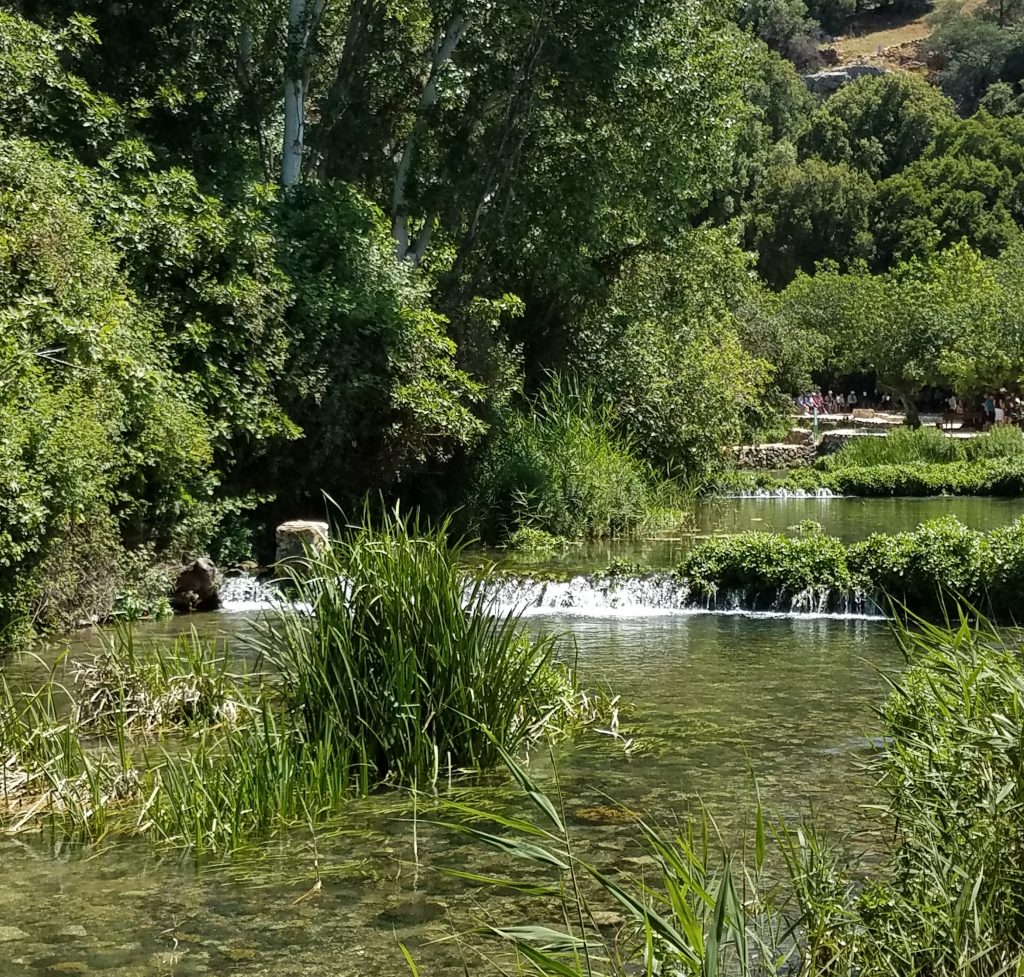 Jesus chose this very place to reveal his true identity as the Son of God. The very gates of hell would not hold back His church from rescuing those who are lost and held captive by the powers of hell itself.

After lunch in a Druze village, we went to the Golan Heights, located in NE Israel. Just as you could see the nearness of Israel’s enemy at the Lebanon border, so it is with the border with Syria. As we looked into Syrian towns just a mile away, we prayed and made prophetic proclamations.

Until 1967 and the Six Day War, it was controlled by the Syrians who could fire rockets at will on the kibbutzim below. From where we stood we could see a mile away off in the distance Syrian towns below where there has been much fighting. What a great place to pray! 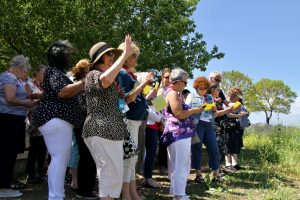 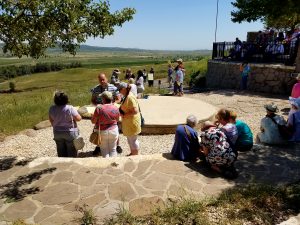 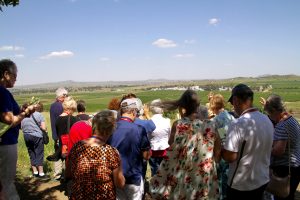 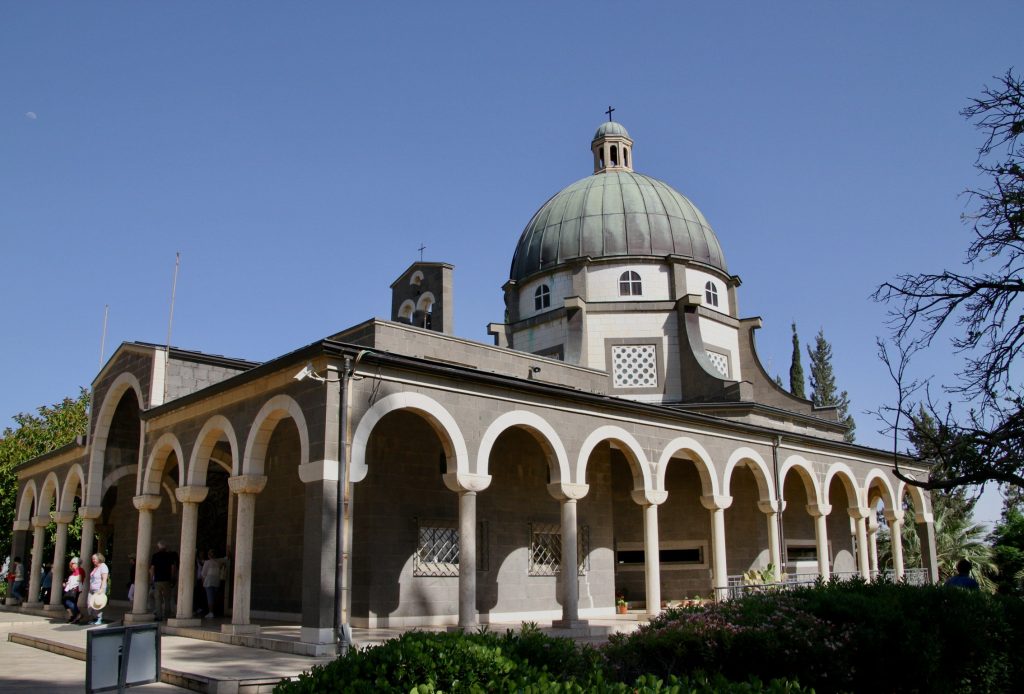 Here on the shore of the Sea of Galilee near Capernaum is a beautiful Roman Catholic church that marks the area where Jesus preached the Sermon on the Mount.  It is referred to as the Garden of the Beatitudes. There’s  a spectacular view of the Sea of Galilee, Tiberias off to the right and the Golan on the other side of the sea. The gardens surrounding the church are beautiful.
Here at the site, Diane Moder, Aglow’s Islam Education Director and IBOD member, shared beautifully on the Beatitudes. She highlighted mercy, illustrating Israel’s mercy which reaches even to their enemies. 2,500 seriously injured Syrians, including members of Al Qaeda, receive the best medical attention in Israel as they secretly cross the border. Once restored, they return to Syria. 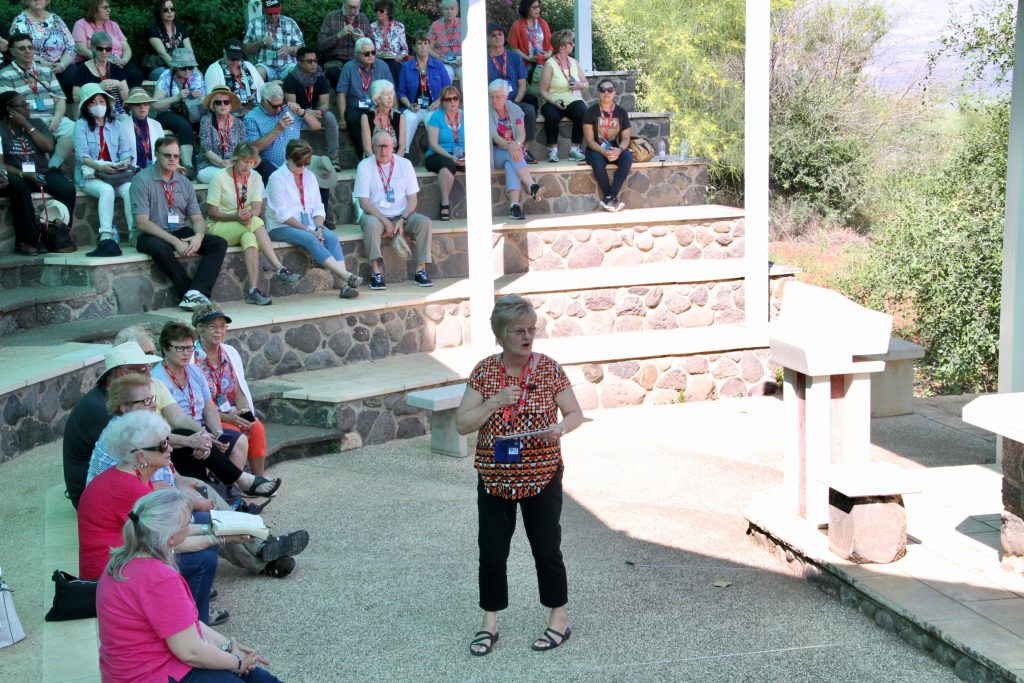 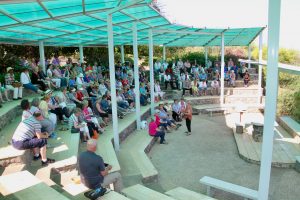 SHOPPING:  On the way back to the hotel, everyone had an opportunity to shop at a quaint little store for date syrup, dates, and souvenirs to bring back home. 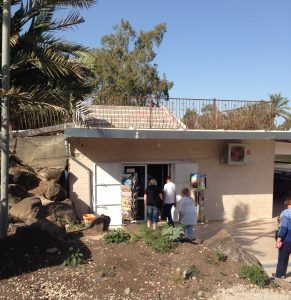 It was another great day in the land of the Bible. Tonight is our last night in the beautiful Gai Beach hotel. We all want to take a last look at the Sea of Galilee. We’ve made so  many memories that we’ll relive over and over as we look at our pictures. The Bible is coming live in so many ways. We can now see and feel the stories like never before. Tomorrow morning we have our longest bus ride as we leave the Galilee for the Judaean Desert.