In the morning, we drove up near Jerusalem for a special time at Yad Hashmona.

Yad Hashmona is a vibrant community of Messianic believers in Israel. It is a communal (kibbutz/moshav) village located in the Judean hills close to Jerusalem. It is the only community of Jewish believers in Israel. It was founded by Finnish Christian Zionists in 1971. Asher Intrader is the leader of Revive Israel which is based at Yad Hashomona. Young Messianic Jewish families have built homes there. 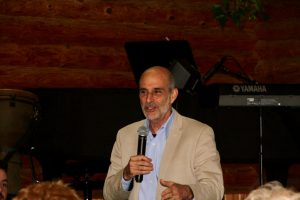 We started with praise and worship (in Hebrew and English) 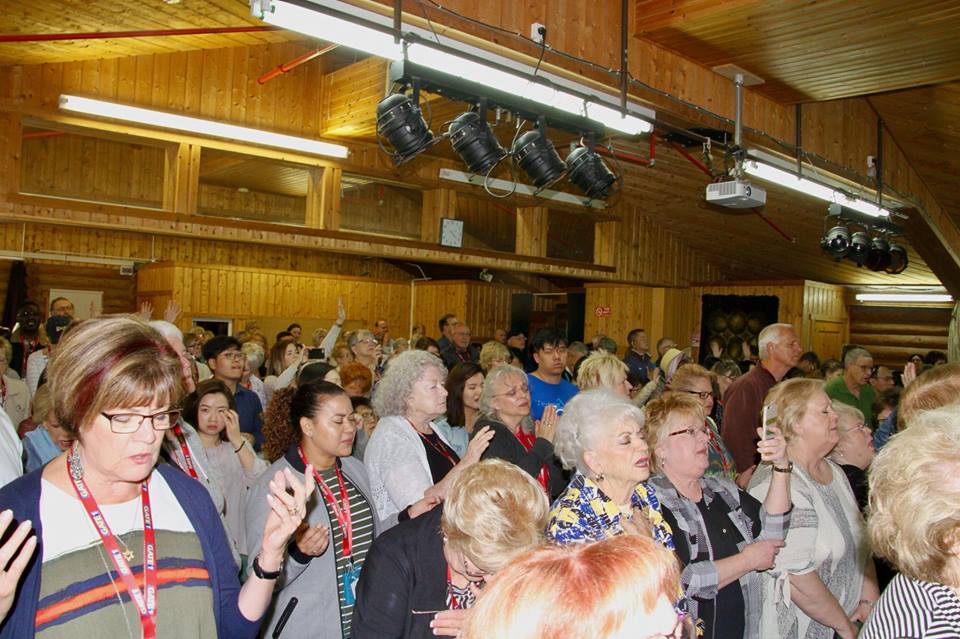 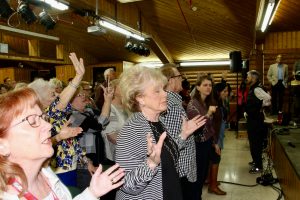 VIDEO:  Need to get this decree down in our spirit!

VIDEO:  This is a bit blurry, but powerful! An Arab pastor from the northern part of Israel prays in this clip.

A bit blurry but powerful!!!

VIDEO:  Would have liked the images to have been clear, but such important intercession for the people in the Middle East. (Yemen, Iraq, Iran , Saudi Arabia, Israel)

Would have liked the images to have been clear, but such important intercession. 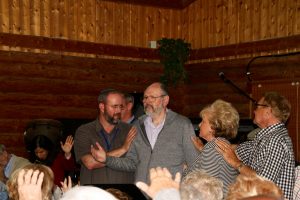 Prayer for Dan Juster, co-leader of Tikkun International of which Revive Israel is a significant partner. 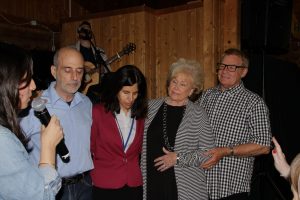 Praying a blessing over Revive Israel and Aglow International. Aglow has had a covenantal connection with Asher and Revive Israel for many years.God has sovereignly  connected Aglow with the Messianic remnant, the tender shoot, spoken of throughout scripture. 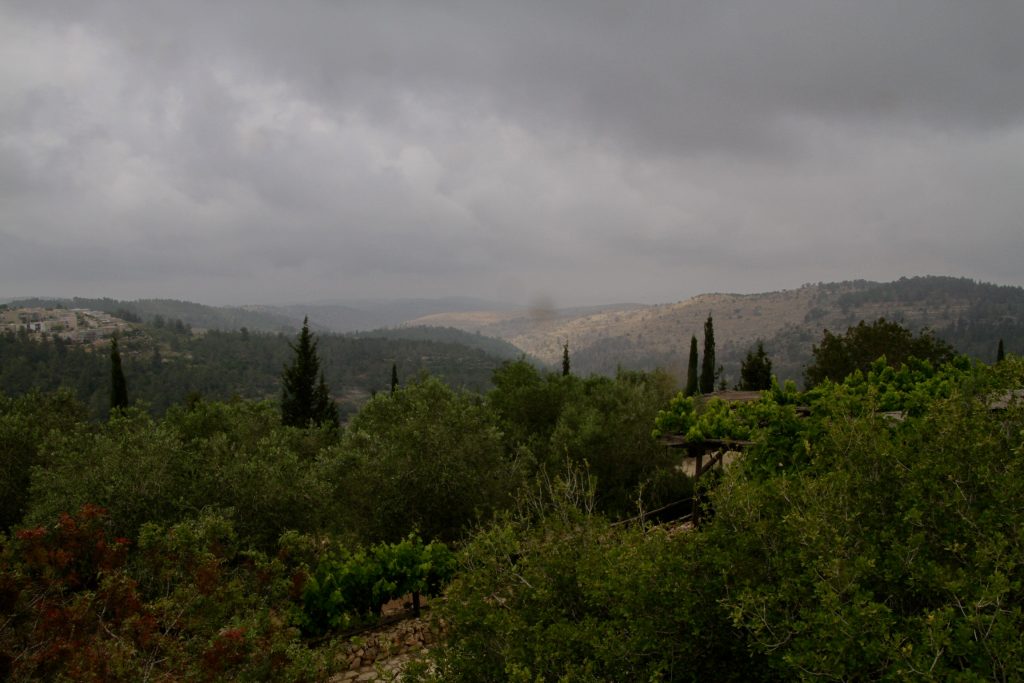 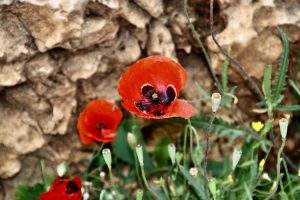 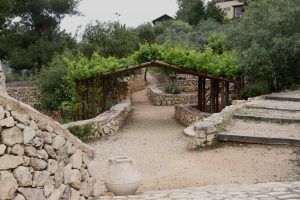 We had a beautiful lunch with the team from Revive Israel.  Delicious! 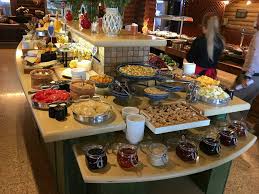 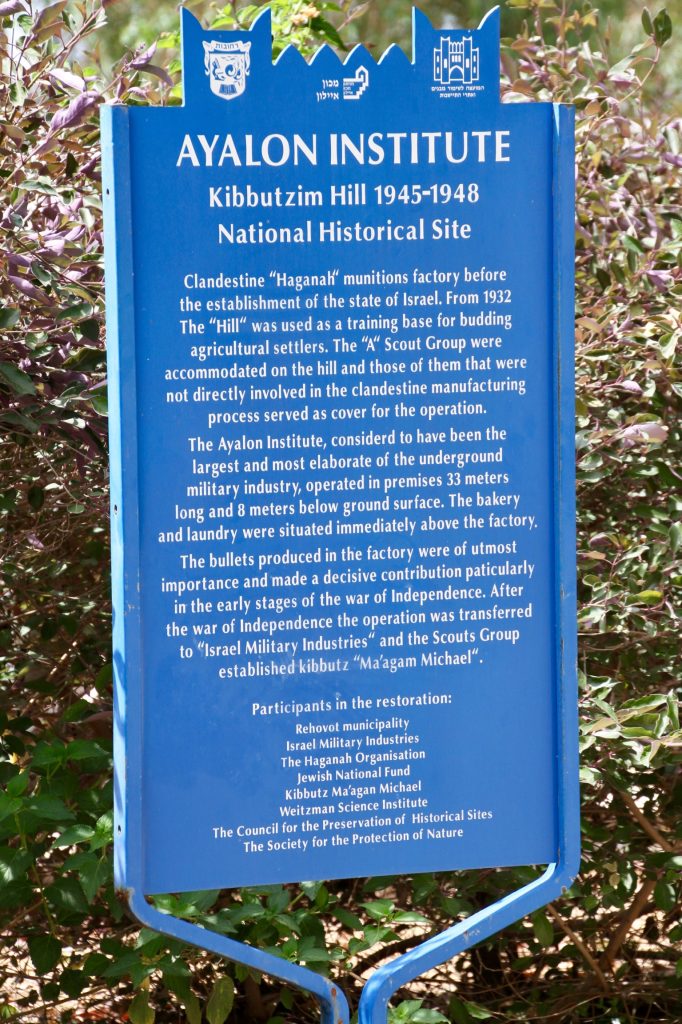 Ayalon Institute  Under the British Mandate (1922-1948), it was illegal for Jews to bear arms. In 1945, with machinery smuggled from Poland under the noses of the British, whose military base was adjacent to the kibbutz.,a secret ammunition factory disguised as part of a kibbutz  was constructed underground.  Digging out a hole the size of a tennis court. under the guise of building storage areas for the kibbutz, the entire factory was completed in three weeks. Access for the forty-five 17-19 year-old workers was by entry under a huge washing machine, mounted on a movable platform.  Fumes from the factory were vented through the bakery and mixed with the fresh bread scent. 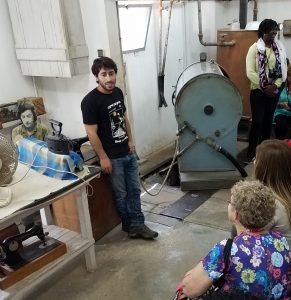 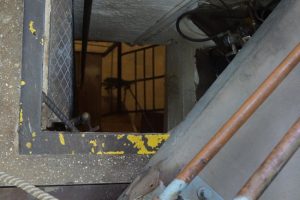 This photo shows the washing machine pushed aside, revealing their secret passage beneath. 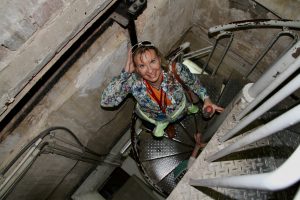 We accessed the facility through a narrow spiral staircase that was installed for people to view the factory now. 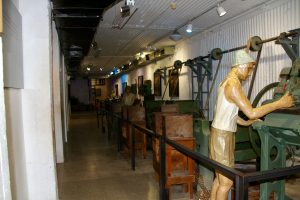 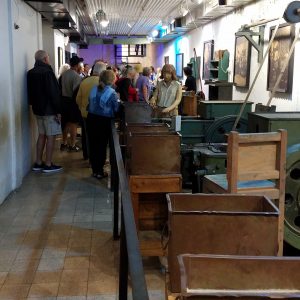 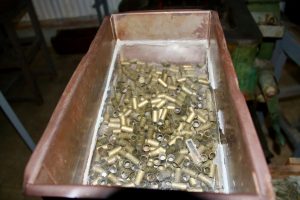 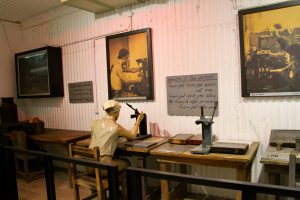 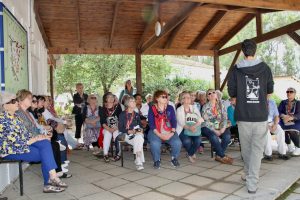 Jaffa- Jaffa is an ancient sea port on the Mediterranean Sea. Best known for the story of Jonah and a city where Peter lived in the house of Simon the Tanner and was called in a vision to go to Caesarea to share the gospel with Cornelius, the centurion. Acts 10:9. We spent some time walking through the town where Jews and Arabs live.  Years ago, when Jaffa got too crowded, 65 Jewish families in 1906 who had purchased land just north of Jaffa, drew lots to build in 1909 and Tel Aviv was founded. 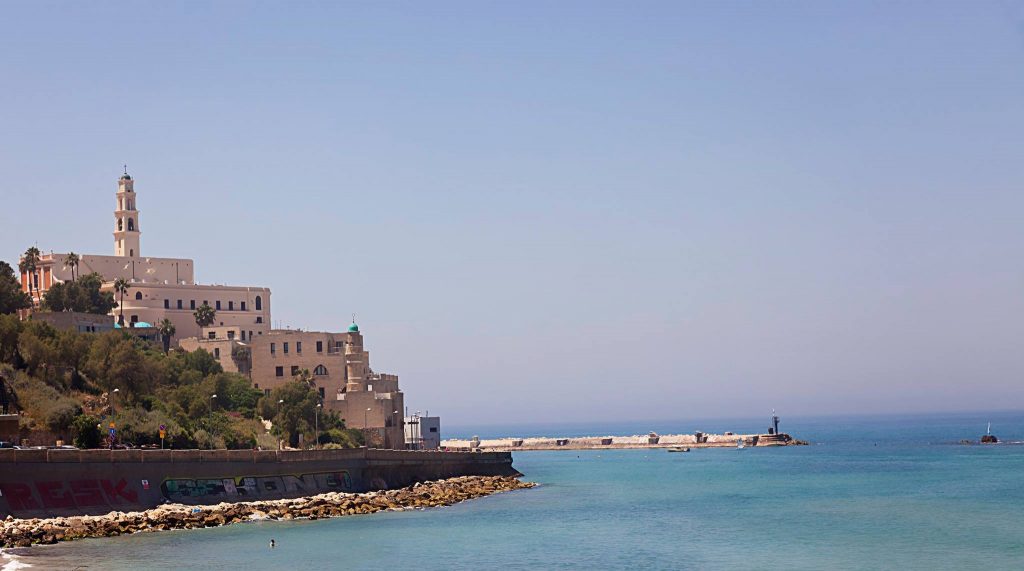 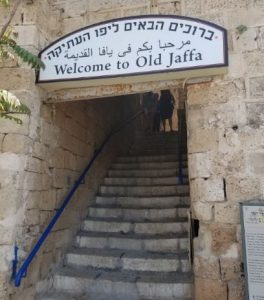 Greeting is in Hebrew, Arabic, and English 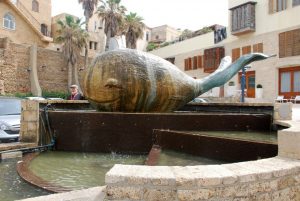 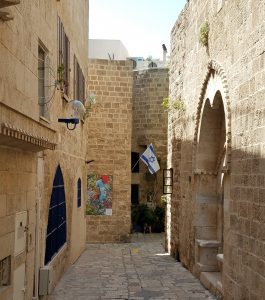 Such a picturesque city! 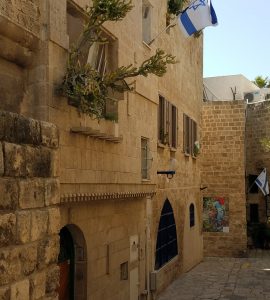 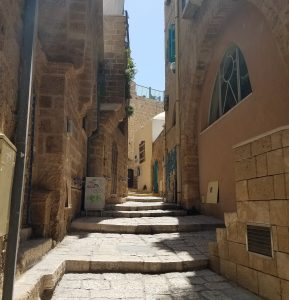 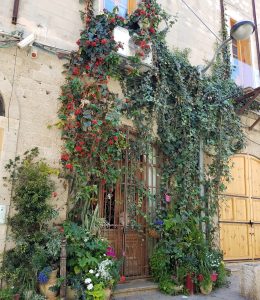 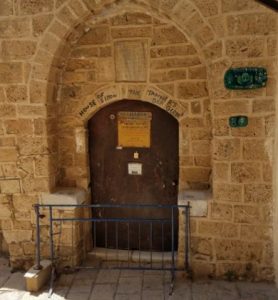 Home of Simon the Tanner 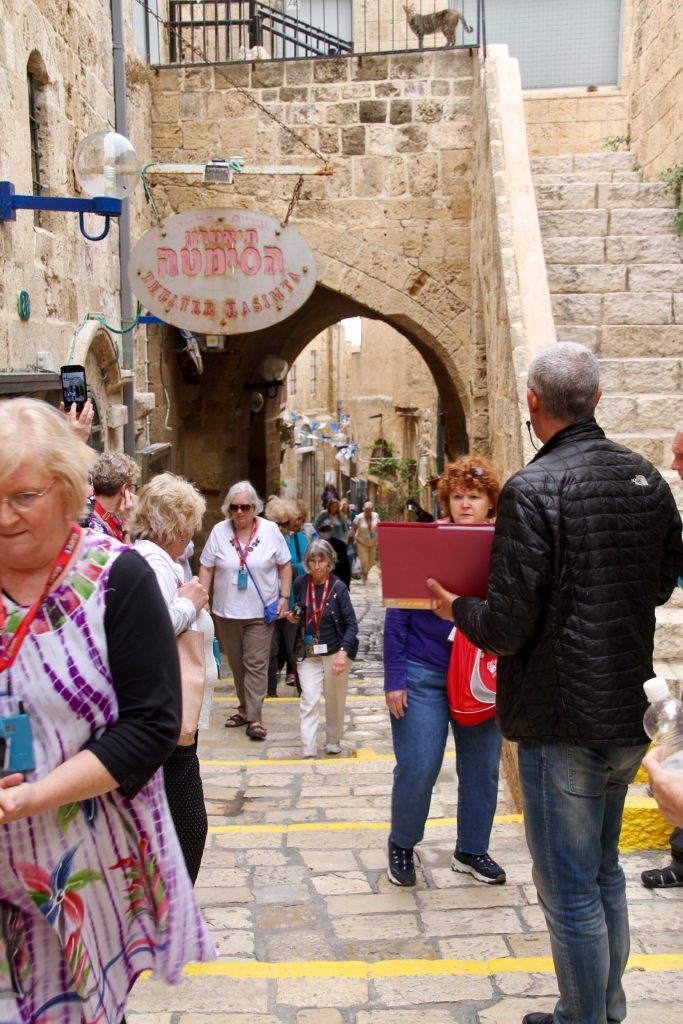 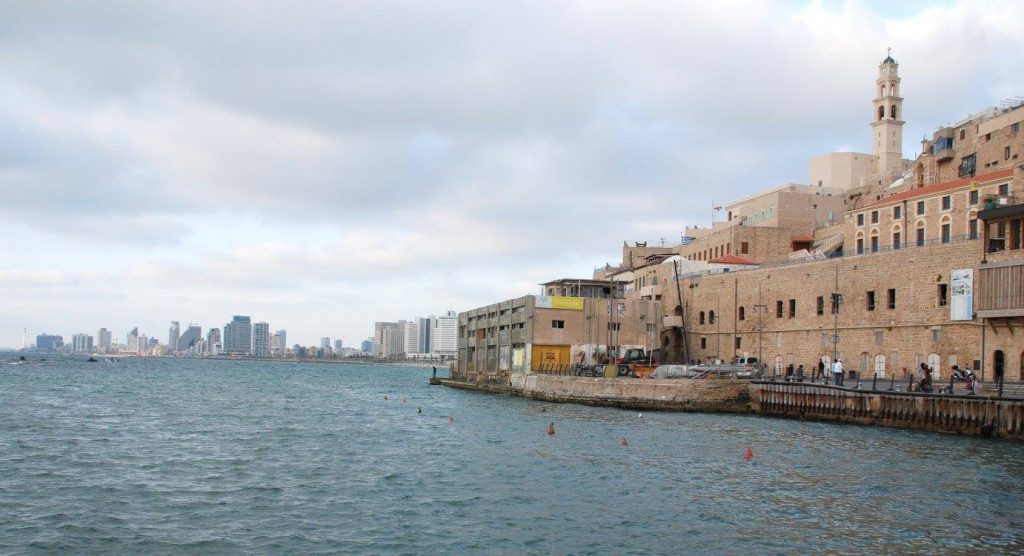 The view from Jaffa to Tel Aviv